Bill is all over Facebook at the moment and is certainly trending in social media circles. But exactly who is Bill? What is his message to us? Should we be scared?

Well, Bill is really quite innocent at the moment and will probably fade into obscurity in a few weeks.

Bill is a social media meme and was created by Eugeniu Croitoru, a Moldovan living in Milan, who describes himself as an “internet entrepreneur”.

He is using the character to spread etiquette tips and advice on social media to anyone who will listen.

According to the BBC, “Eugeniu isn’t making any money from the character, but he does hope to in the future”. Well the future could be sooner rather than later! Be Like Bill now has his own Facebook page: be like bill, which has nearly 1.5 million likes, so some form of revenue could be on its way to Eugeniu.

Just recently, however, the stick character has divided social media. Initially people liked the character and it started spreading to different languages with the same moral messages.

However, what was an innocent meme has now attracted a possible hate campaign and many parodies have sprung up. Sites such as Don’t be like Bill and images of Bill being killed are now circulating, which I guess could be upsetting for younger kids.

So why are people hating on Bill? Probably because he is telling us how to behave and be moral saints on social media, or because he has gone viral whereas other meme efforts didn’t. But its probably just plain and simple, because its just something people do, make fun out of something else.

It’s a shame that something quite innocent has spawned into hate and, more than likely, the death of Bill.

On the positive side, Bill is somewhat reminiscent of the NSPCC campaign, Share Aware. So what we must remember is that whether or not Bill was created to make money, we do need to have some etiquette in social media circles and keep our kids safe online. If Bill can help with this, then Long Live Bill! If not, then Bill will soon be signing off Facebook for good. 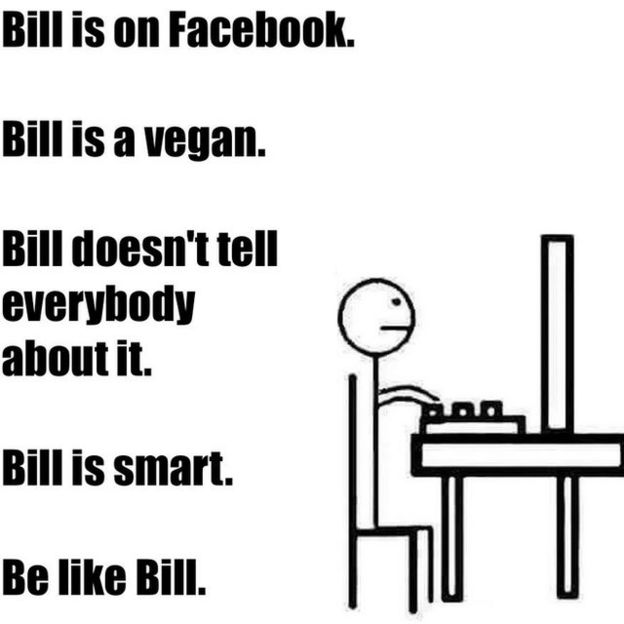