I was a bit stuck thinking about bits and bats for my brothers Christmas pressies this year, they are now 18 and 16 and as a result the usual things I have given them in the past are now of no interest to them. Instead of copping out with a bottle of Jack Daniels, I thought I’d have a look on some of the boy’s toys gift sites.
I wish I’d done this sooner, what a collection of cool (yet utterly useless) products I found.
The two that stood out for me are the Isotoner SmarTouch Gloves and the Grippy Pad. These two stood out because they are something I know they will like and use, and something I will like and use too. 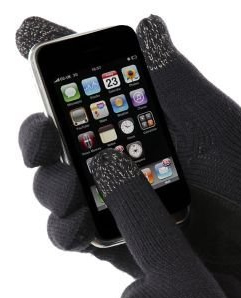 The SmarTouch gloves are a masterstroke, I wrote in a previous blog post about how older smartphone used a stylus to enter text, well one plus point to this was the ability to use the device in gloves, something which is not possible with the screen on modern smartphones. As the name suggests, SmarTouch allows you to operate your touchscreen in gloves, genius.
They do this by having a conductive fabric woven into the fingertips which is said will not scratch your screen.
In everyday use the gloves work really well, you lose a bit of the feel and accuracy on the screen as fingers become twice as wide, though with a bit of practice good results can be achieved. As a glove they do what you expect, keep your hands warm.
The true test will be Boxing Day when I’m at the football checking the half time scores, if they pass that test then there will be another pair in the post. 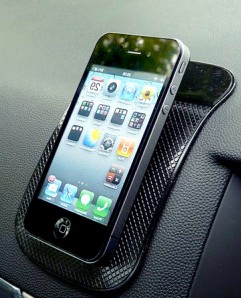 The grippy pad is truly brilliant, I’ve no idea what it is made out of but it’s similar to the sticky gel ball you had as a kid that would stick on everything, only without the gooey residue.
The thing sticks anything to anything.
Mine is currently stuck to the car dashboard waiting to cradle my new HTC One X+ for the drive home. The advert showed a tablet computer stuck to kitchen doors and it really does work, not that I’d like to leave my iPad stuck to a door above a boiling pan. There is no resistance when removing the phone, it just sits on and lifts off.
Time will tell how they long they last or when the attraction wears off, but at under fifteen quid each they do make pretty cool stocking fillers.

Now to the ridiculous