Amidst this week’s general election, discussions have taken place regarding the old fashioned way in which Britain is still voting. On 7th May 2015 electorates will queue inside a draughty church hall and  drop a piece of paper marked ‘X’ into a ballot box; perhaps also thinking to themselves – why on earth are we not yet voting online?

Voting electronically may be closer than you think. A team from the University of Birmingham have uncovered a secure way in which voting can be done via a home computer.

The electronic voting system is secure enough to withstand cyber threats and hacking says Professor Mark Ryan, who led the team at the university. He also mentioned the fact that it could protect the system against vote-rigging and manipulation of results.

The professor, states that the system needs more testing before it could be fully functional, but estimates that we could be voting electronically by the 2025 election.

The system named Du-Vote, took two and a half years to build and is based on the same card readers that we use for everyday online banking. 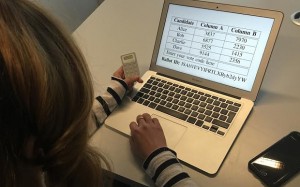 Benefits of going electronic could include;

It has been proposed that the traditional method of voting would also stay in place to ensure that those who are unaccustomed to computer technology would not be put off voting.

It does seem a little bizarre that nearly every other important transaction we carry out in the 21st century can be done so online; so why is voting still stuck in the dark ages? Perhaps there is a lack of political momentum or possibly the task is just too big to undertake.

Maybe it’s for the simple reason that society is not ready to forego the British tradition of attending a polling station.

What do you think? Would you prefer to e-vote or are you happy with the way things are?