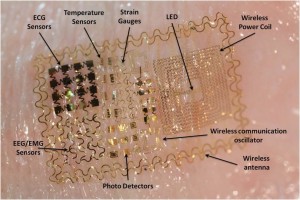 Engineers have developed a flexible electronic skin that can read brain activity and allows users to control their devices with the power of their mind.

The technology that it uses is nothing new. Electroencephalogram (EEG) headsets that monitor electrical activity in the brain have been around for a while but they are big, clunky and very impractical. They also look ridiculous!

Consequently, a team of talented scientists have created a new method that discreetly tracks brain activity in order to perform important functions.

Led by John Rodgers, a material scientist from The University of Illinois, the dedicated group have abandoned clumsy electrodes and built a more convenient device that can stay hidden behind your ear for up to two weeks.

During tests, participants wearing the tiny electronic membrane, were able to spell out the word ‘computer’ on a screen in front of them using only their brains electrical activity.

In appearance, the little gadget could be mistaken for a temporary tattoo. It sticks to the skin, without causing irritation and can be worn continuously for up to fourteen days, until the build up of dead skin cells underneath encourages it to drop off.

The device won’t get in the way of your everyday activities either; it is made to stay in place whether you’re sleeping, running, swimming, or climbing Mount Everest! The device is so easy to wear, that during initial tests, participants forgot they even had it on!

The intelligent technology consists of a small patch of gold electrodes with sensors that are thinner than a human hair; it is wirelessly powered and can send high quality data about the human body to a computer in real time.

For this reason, it has a number of potential practical medical applications; engineers envisage the patch being used for wireless health tracking. There has also been talk of using the technology to predict seizures in patients and control bionic limbs.

When placed on the throat it is also sensitive enough to record throat muscle contractions during vocalization, which means it could help people who have difficulty speaking.

There have also been discussions for its everyday uses when the technology becomes accessible to consumers. For example, automatically brewing a coffee for when you wake up on a morning or using your mind to silence any notifications on your smart phone.

Rodgers himself has stated, ‘The skin represents one of the most natural places to integrate electronics, “As the largest organ in our body, and our primary sensory mode of interaction with the world, it plays a special role.”

The patch is unfortunately not quite as precise as a standard computer just yet. But technology is developing at such a speedy rate, who knows what could happen in the near future!