Are you still tempted to answer your phone whilst driving?

Since the new law has come in to force about using your mobile phone at the wheel, thousands of driver have been stopped and fined for using their phone at the wheel. Nissan, the car manufacturer has developed and built a pocket for you to put your phone in to stop any distractions.

Why did this law come in to force?

Everyone should know the answer to this because it’s plain and simple. Mobile phones are banned at the wheel due to the distraction and use of it whilst at the wheel. You may think using your phone for just a second at the wheel is ‘fine’ but you may need to act in a split second. Being on your phone will make your reactions even longer as you have less concentration as to what is going on whilst on the road.

From March 1st 2017, drivers caught using their phone illegally can be given a £200 fine, have their license taken away (if the driver has been driving under 2 years), receive 6 points on their license and can be taken to court where they could be give a £1,000 fine or £2,500 for lorry and bus drivers.

This is why the signal blocking compartment will be a hit for all those who easily get distracted. They have installed this in their Nissan Juke, in which the compartment is located in the arm rest. All Bluetooth and Wi-Fi signals will be blocked including notifications from social media and text messaging.

How did Nissan come up with this feature?

The managing director had stressed about the use of mobile phone use at the wheel. It is understandable that the accidents that are caused by distraction of a mobile phone was still increased despite laws being in place. They wanted to come up with a solution to help those who struggle to remain focused on the road when their phone notifications go off leave their phone alone. They then thought ‘well what if they have no notifications to distract them?’ and that would be by having no signal!

It’s one of the best ideas to help keep those safe from being involved in an accident and to save themselves from being fined and prosecuted. 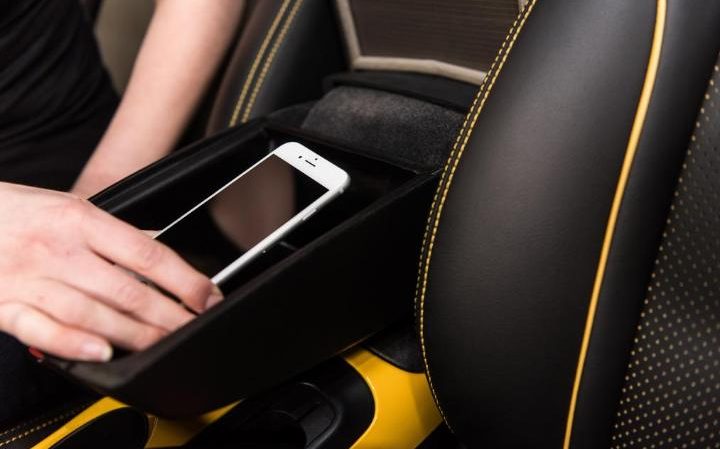 What are the rules and guidelines of the law against mobile phones?

For those who aren’t exactly quite sure what the rules are, here’s a bit of information for you.

It’s against the law to use your mobile phone UNLESS you have:

You may think it’s ok to use your phone when you’re stationary, but it most definitely is not. The law still applies if you are:

You can find out more information about the guidelines here