The latest craze to hit the social media scene is Periscope. Brought to you by Twitter, the live video streaming app has sent social media fans into a frenzy. Some have even hailed it the greatest social media platform of all time. 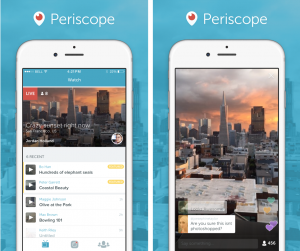 perience live
videos from their mobiles. Simply tap your mobile phone and immediately broadcast what you’re doing to anyone who chooses to follow you. The app also allows viewers to
demonstrate their appreciation for a video, by tapping the screen, prompting a series of love hearts to appear.

The idea behind Periscope is that you are now able to experience the world through somebody else’s eyes. Want to ride a rollercoaster in Japan? Or view a sunset from a hot air balloon in Cappadocia? Well now you can. Periscope insists the app is like ‘a visual pulse of what’s happening right now”.

If the broadcaster is somebody you admire then sharing their experiences could be quite interesting. A number of celebrities have taken to Periscope to reach out to their fans; David Blane has been found using the app to perform magic tricks live from a bar and Jamie Oliver has been frying up bacon live from his kitchen.

But is Periscope safe? One issue is that you no longer know if the person pointing a phone at you is taking a photograph or broadcasting you live to the entire world. The other issue is how will parents supervise their children and all the live content that they are posting?

Periscope could flourish or fail depending on its users and the content that they choose to post. But for now, it’s just another fun and exciting social media tool for all to use. The app makers themselves have stated that while a picture could be worth a thousand words, live video can “take you someplace and show you around”.

Periscope is currently available to download for free in the Apple App Store and an Android version is coming soon.